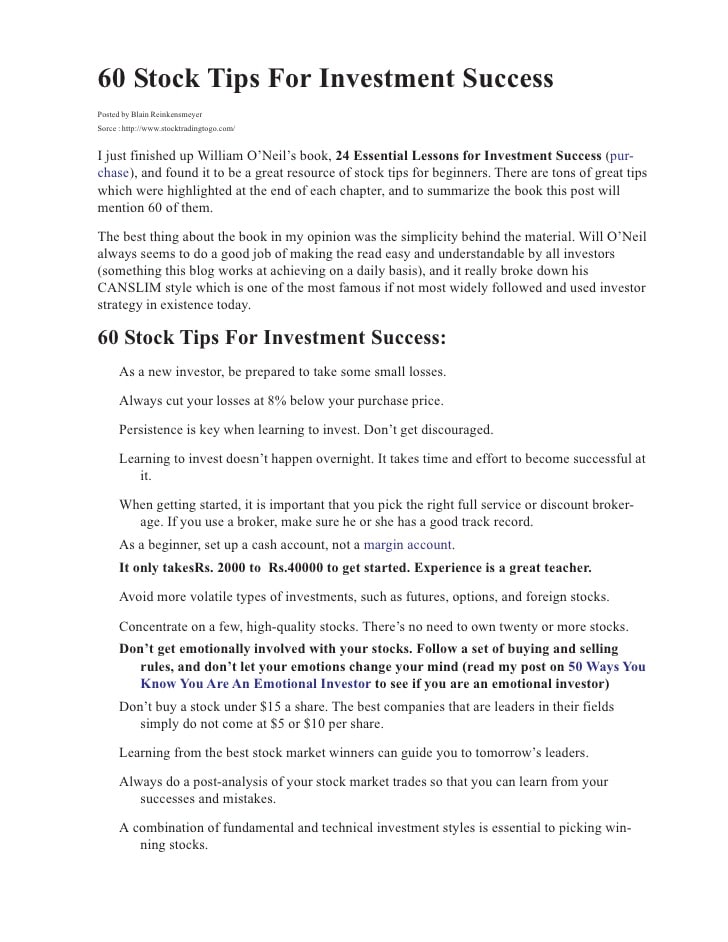 If you have very little knowledge of the stock market and no time to study it, you might want to consider “buying what you know.” Invest in companies that make products or provide services you like.

This is the investment strategy that was preached by fund manager Peter Lynch in the 1990s and I think it’s still relevant today. Lynch managed the Fidelity Magellan fund for 13 years and it produced returns of 29 percent per year, on average, during his tenure.

Here’s how I applied his strategy to my investments. My wife and I own a 1994 Honda Civic. It’s old, but it runs like a top, it has amazing trunk space for a car its size and it sips gas. More importantly, it has only broken down once since we owned it (it needed a new starter). I love that car, and everyone I know who owns a Honda loves theirs. So I bought shares in Honda Motor Company.

I also bought shares of Toyota. My sister purchased a Prius last year and she and her husband have been raving about it since day one. I rode in it and can see why they like it: it’s quiet, gets great gas mileage and is easy to park. My neighbors own a Prius and they love it too.

While in college I happened to read “The Machine That Changed the World” (by Womack, Jones and Roos), which details Toyota’s production methods, and it convinced me that it’s going to be very difficult for any other car maker to beat them at their game.

How have Toyota (TM) and Honda (HMC) been doing since I invested in them? Both have been gaining market share at a rapid clip, far outpacing the competition. Their shares rose 120 percent over the last ten years, while General Motors’ (GM) has fallen 40 percent. (Ford’s shares fell 60 percent over the same period).

Let’s look at the most mundane of weekly chores: grocery shopping. My brother introduced me to Costco a while back and I’m very glad he did. Not only have I found their prices low, but their service is excellent too. It’s the only grocery seller I know that takes pains to shorten the wait at the checkout counter.

If a long line is forming at the cashier, they send employees out with bar-code readers to scan products in the waiting carts. When this is done, customers don’t have to put their goods on the counter; they simply hand over their store card and, with one swipe, the cashier knows exactly what’s been purchased. As a result, lines move fast at Costco.

The first time this happened, I was so impressed I went home, researched the company and bought shares in it the same day. The stock has not disappointed. Costco (COST) shares have risen 35 percent over the last five years.

I also shop online a lot. My favorite destination on the Internet is Amazon.com. Being an avid reader, I can spend hours browsing through Amazon’s selections, then deciding whether to buy from Amazon itself or a used-book retailer. Over the years I have become increasingly impressed with the site, especially with its policy of free shipping for purchases of at least $25 in value, and the new credit card they are issuing with J.P. Morgan Chase, that gives you a $30 credit towards purchases made on Amazon.com

I bought shares in the company a while back and have been truly blessed. The stock price (ticker: AMZN) has almost tripled in the last five years, and its prospects look very good, investment analysts say.

One last favorite: my satellite TV company. When I first moved to New Jersey my wife and I subscribed to Comcast. It was the only provider in the area (Woodbridge), so we really had no choice. From my experience, I have to say Comcast is probably the worst cable TV company in the world.

We asked for the lowest-cost package when we signed up. They gave us a higher-cost one. When I found out (months later – who would think they’d be deceptive like that?) I tried to switch to the cheaper package. They said they would, but never did. I called to complain and every time I did they said they would solve the problem. They never did.

After months of being lied to and given the run-around, we finally switched to satellite: the Dish Network. They were so helpful, kind and eager to please, I felt like I was on a different planet. Customer service was so simple and easy to reach, and they were so responsive to my complaints (we had to have our receiver replaced after an electrical storm) that I decided to buy shares in the firm.

Shares of Echostar Communications (symbol: DISH; they own the Dish Network) have risen more than 60 percent over the last five years.

This isn’t a fail-safe strategy. I’ve also bought shares in some not-so-hot performers (AMD and Intel, most notably). But as a whole, my portfolio has done well.

“Buying what you know” should be considered a starting-off point for investing. It’s always best to do as much research as you can before sinking your savings into such shares, because buying stock like this can be very risky. Even investing in index funds carries risk.

So be careful, and do your homework. You could lose your shirt.

NOTE: You invest at your own risk. The author and this website cannot be held responsible for investment losses incurred by readers of this article.